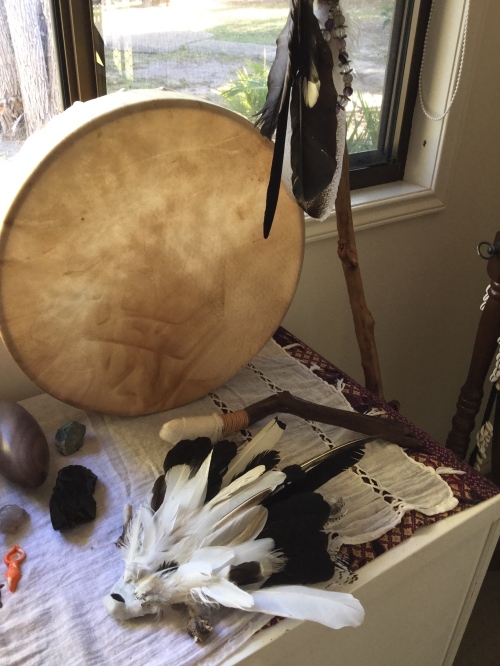 It’s been a while since I re-birthed Yggdrasil, and I thought I would bring you all up to date.  This is one powerful drum!

A few months ago, I helped a friend for a few days working on a Psychic Expo and one of the things I did was give free drum healing.  Except my only previous experience of this was a 15 minute workshop whist on a retreat- in a Tipi – and being shown two ways to do drum healing.  Both of which I forgot!

So, being much practiced in the art of bulls*^t, I made it up as I went along!  Something was good though….because over the next few weeks, my friend kept getting phone calls from people who had experienced my 5 minute freebie and wanted to book a proper session. LOL!

Since then I have practiced on friends and in my meditation circle.  With great results!

There are a lot of things I do in non traditional ways.  I want to do something, and no-one has told how it is expected to be done, so I just go do whatever it is, in my own way!  The drum healing is just one of those things.

The way I move the drum around the body, the beat, the volumn; these are all things that I just make up.  I do however, listen to the tone, I notice the areas of pain, of congestion and can work on those areas.  Mainly though I just be that conduit for Energy – and Allow….

It’s been a while since last I wrote and heaps has happened in my 3D world.  Suffice it to say that Spirit has been challenging me.  But now my world is coming back together the spiritual quietness I have been experiencing over the past few months is moving away.  Exciting things are happening again – like getting to know my guides.  There have been a few popping up and I’d like to talk today about the most recent – Lulani.

Just over a week ago I suddenly woke up just after midnight.  By 1 am I’d given up on sleep, made a coffee and moved out to my back patio where I have a comfy sofa and a big quilt.  I wrapped myself up snugly and turned on my iPad.  I am one of 9 Admins for a wonderful Facebook page I’ve mentioned on other posts – First Wave Blue Ray Indigo.  I’m the only Australian Admin – everyone else is in Europe or America – so it was good to get in on the chatter with everyone else instead of sleeping through it!

The night was perfectly still.  Perfectly quiet.  Even my dogs were not snoring which is virtually unheard of – they are both window rattlers!  It was a time-out-of-time.  Surreal.  Into the middle of the conversation Essence Ka Tha’ras (who is the instigator of the First Wave page – an amazing woman) asked “Who’s guide is Lulani?”  the conversation carried on as if no-one had seen that post.  I answered that I didn’t know my guides, so I couldn’t help, but the name did resonate with me.  Lulani is an Hawaiian name and one of our Admins is Hawaiian, so it was logical to think that the guide would be hers.  But no – she is my guide!

Through Essence, I discovered that Lulani can be male or female, but this guide has female energy and that the name means “Highest Point in Heaven”  Of course, I later checked on Google – that fount of all knowledge – and this is exactly right.

Other messages were given to me through Essence:

and that was the start of an amazing hour.  It was like a Guide party!  Five more of the Admins were given information about their guides and we were all given Tasks.

For me I first had to obtain some lava.  To help with communication.  I’m not clairaudient (gosh I wish I was!) and as Lulani is Hawaiian and I was invited to dance with her and Pele (Pele is a very strong Hawaiian Goddess who is deeply honoured and respected) it seemed logical to seek a piece of Hawaiian lava.  Except I knew that Pele will not allow anyone to remove lava or sand from the islands.  Through Essence again, I was told that I have permission and so I wrote to my friend and fellow Admin asking that if she was comfortable with the request, could she please send me some lava from her island.

I received a reply a couple of days later – a resounding NO!  My friend would not let me risk my very life in this way, and she most understandably was not willing to risk her life.  She wrote a long letter about this and I was deeply affected by her for caring so much and I honour her and Pele by respecting this wonderful friend and her fiery Goddess.

I returned to my bed but almost immediately the phrase I had been given “moon night sun” popped into my head and I knew the night wasn’t over yet.  So back outside, under my quilt and back into the conversation where Essence told me that Lulani had said that when researching ‘moon night sun’ in Google I should check out “Sun Behind the Sun.”

Now – when reading my diary notes about this lot, I have just noticed that I had written that “Moon Night Sun” is Lulani’s way of speaking about the Goddess Temples which can only be accessed through a secret doorway in the Sun behind the Sun.”  I wish I had seen that earlier – It would have saved me a wonderous and excited two days researching and barking up the wrong tree!!!

One other very interesting piece of information came out of this conversation – my message was received at 2:22am. The Metatronic Numberology I AM Keyword for 222 is:

I AM Multi-dimensionality in Gestation.

More on that when I work it out!  My next post will be about how, a few days later I was given a gift and have been learning to ‘speak’ with Lulani.

PS – I ordered a lava pendant from ebay – lava from Bali!  Pele walks the whole world and has been seen at many volcanoes.  There was no instruction that the lava had to be Hawaiian!  LOL

So how did I get this name?  Almaak Dancer. My original soul came from the star system Almaak in the Andromedan Galaxy.

As for the dancer part? I love to dance. Originally classical ballet and more recently, belly dance. Or just prancing around the kitchen!

But the actual name came from a message – presumably from my higher self. But it was the first time I had been given a full-out message and asked to share it. It was really scary, publishing something, even though there was nothing new in the message. It was more of an introduction than anything else.

Anyway, the message went onto Facebook where, other than a few close friends who commented, it pretty much just fell into the vast quagmire of similar posts and disappeared.

“I am a member of the Council of Twelve from Andromeda. My home is the binary system of Almaak. The blue crystal planet. I was given the choice to observe or participate in the assistance we are providing for the raising of Gaia and her children. I have chosen to participate and, in choosing thusly, I am, as many, limited in my memories. Covered by a veil of forgetfulness so that I may fully learn from the human experience. You may know me as Dancer which is a name suitable for this human vessel.
Humanity is changing and separating into two species. Those who are awakened, conscious, empathetic, becoming One. Becoming aware of I AM. These are the ones with changing DNA, who are rising towards higher vibrations.
There will remain at a lower level, the sub-humans. Those who do not love, who do not have compassion. Those who hate and hurt others. And in doing so, hurt themselves most of all. For they too have the opportunity and choice to rise. But in choosing their lower path, these unfortunates will forever remain a lesser species. But remember, they are still children of Gaia. There is still time. Show them the path of peace and love.”

So there you have it. On another time I’ll write about my journey through two Stargates to Almaak and the very short, but beautiful experience of meeting a Light Being.

Join our community and have these meanderings delivered straight to your email.<br>

A Krone is a wise woman.  Am I wise?  Read on and decide for yourself!

I live in Far North Queensland – land of crocodiles, stingers, cassowaries, snakes, spiders, cyclones and lots of other things that try to kill the unwary, but despite all this, it is a beautiful country I am honoured to call home.

I have many ‘titles’ – Holistic Counsellor, Meditation Therapist and Teacher, Reiki Practitioner, EFT Tapping Master Practitioner, Energy worker and more, but mainly I am here to learn to be the best ‘me’ I can be.

Until illness and injury forced me to slow down, the physical aspect of my life was up front and forward.  During my times of recovery, the spiritual aspect came forward to be worked upon.  Now it is time to blend the two.  My Spiritual Sister, Friend and Teacher, Essence Ka tha’ras has a phrase she says all the time – “You can’t separate the physical from the spiritual” and this has become a driving force for me.   The Truth of this statement becomes more obvious with each passing day.

In these meanderings I often come across ‘truths’ but it must be remembered that what is Truth for one person at that time of their life may not be Truth for another person – or even for your own Self at a different time in your life.  Truth, like Time, is fluid.  In my search for the truth of who I am I have faced many dramas and fears, but have always found that however dark those times are, there is always a spark of light if you only care to seek deeply enough.
Flip the Fear.  Find the Bling.